Objectives and Eyepieces- How to select the right one for you. 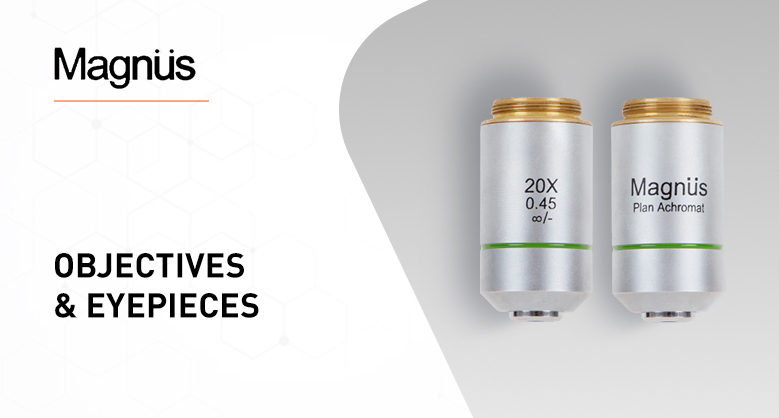 There are many different types of objectives available for microscopes, but without a basic understanding of how they work, it can be difficult to know which ones are best suited to the specific needs you have. That's why this article takes you through the basics points to keep in mind ,so that you'll have a better idea of what type is right for your needs.

Objectives and Eyepieces: What Do They Do?

Following points to consider to choose the right objective.

Optical correction such as achromatic, apochromatic, plan and semi-plan are often denoted on the objective in order to show the design of the objective. Plan and semi-plan objectives correct for field curvature. Field curvature often results in blurred images on the periphery and correction for this helps produce good quality images. Whereas plan objectives correct better, allowing for better display (over 80 per cent) of field flat, semi-plain objectives produce about 65 per cent.

In a finite conjugate design, the objective focuses light from the object into the focal plane of the eyepiece. An infinite corrected objective collects light from the object and forms a parallel beam that passes through a tube lens.  The advantage of this design is that additional optical elements, such as polarizers, filters, and wave-plates, can be placed in between the tube lens and the objective without interfering with the focusing of the beam. The infinite conjugate design is often used in fluorescence microscopes, which rely on filters. 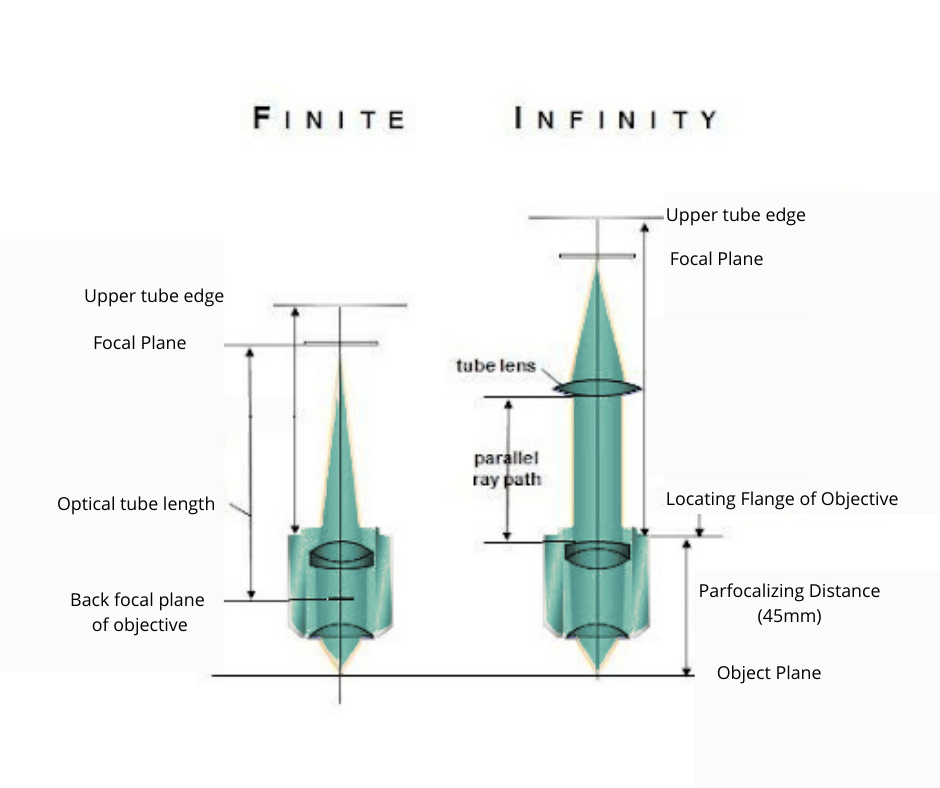 Denoted by a number (such as 0.17mm) the cover slip thickness is labeled on the objective to note the type of cover slip that should be used. A cover slip changes the way light is refracted from the specimen. Therefore, it is important to ensure that the right cover slip is used in order to produce a good quality image. Zero(0) denotes no coverslip to use. Dash(-) denotes use of coverslip or no cover slip, it does not matter.

Is the distance from the objective’s front lens to the closest surface of the coverslip when the specimen is in focus? WD is inversely proportional to the NA, which means that higher NA objectives typically have low working distances.

The higher the NA, the smaller the distance between two objects. As we mentioned previously, choosing the right NA for your application is crucial in determining the resolution of your microscope system.

It is an angle of incidence. It is the most important parameter of a microscope. NA measures its ability to gather light. It’s an important factor to determine resolution, depth of focus, and the brightness of images. Objectives with a larger NA gather a wider range of light, resulting in brighter, higher resolution images.

NA is also important to observe very fine structures or detect dim signals during fluorescence observation. When determining which microscope objective will resolve the smallest feature in your specimen, think about the NA. As you weigh your options, keep in mind that numerical aperture typically ranges between 0.10 to 1.25.

How to Setting up Objectives with your microscope

Attach each objective to each lens mount hole of the revolving nosepiece, starting from the lowest magnification objective and increasing the magnification in the clockwise direction seen from the bottom. By attaching objectives in this way, the objectives can be switched in ascending order of magnification

Objectives and Eyepieces- How to select the right one for you. October 28, 2021
Latest