Importance of Microscope in our Daily Life 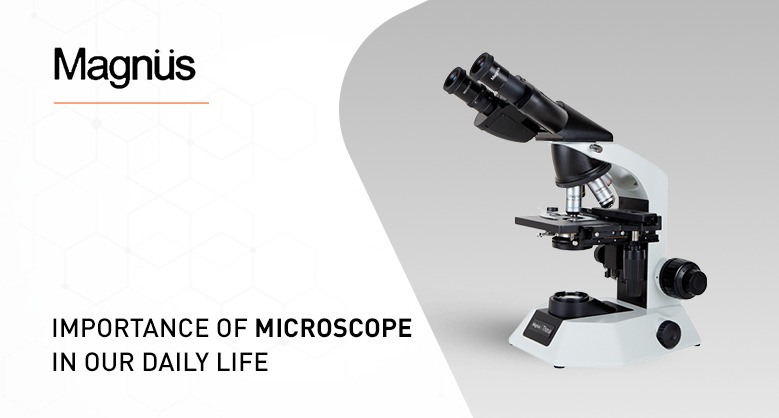 Microscopes have opened up many doors in science. By using Microscopes scientists, researchers and students were able to discover the existence of microorganisms, study the structure of cells and see the smallest parts of plants, animals and fungi.

When it comes to biology, Microscopes are important because biology mainly deals with the study of cells (and their contents), genes and all organisms. Some organisms are so small that they can only be seen by using magnifications of 40x-1000x, which can only be achieved with the use of a microscope. Cells are too small to be seen with the naked eye.

Microscopes are not just used to observe cells and their structure but are also used in many industries. For example, electron microscopes help create and observe extremely tiny electrical circuits found on Silicon microchips. Scanning microscopes are much more sophisticated and they have higher magnifications than light-refracting microscopes.

Apart from biological research use and industrial use, Microscopes are also used in the field of genetics. Genetics is the study of variations in an organism generation after generation. Genetic engineering requires the mixing of genes. Genes are even smaller than cells, which is why microscopes are essential in this field.

Without the microscope, mankind would not have been so developed and many diseases would still have no cure.

Microscopes are also used to diagnose illness in hospitals and clinics all over the world. Microscopes magnify the blood samples, so the doctors or the pathologist can see the viruses and the parasites attacking the red blood cells and take the necessary steps to cure it.

Microscopic examination confirms the laboratory tests that may be positive for the disease. Technicians count the number of red blood cells infected with the virus or parasite to give the doctors an idea of how advanced the disease is in a patient.

Microscopes use the simple visible light refracting lenses. Electrons, x-rays and infrared rays Scanning electron microscopes are able to resolve the viruses which are far smaller than any cell. They enlarge the view of tiny viruses, which allows scientists to develop the vaccines and cures for infectious diseases in the humans and the animals.

All branches of biology use Microscopes especially in Molecular Biology and Histology (the study of cells). Microscopes are the backbone of studying biology. The biologists use them to view the details that cannot be seen by the naked eye such as the small parasites and small organisms which is important for the disease control research.